Hillary Clinton is professionally formidable, masterfully intelligent and isolated from political reality by a bevy of consultants, adoring fans and ambitious hopes for becoming the first former First Lady to become president of the United States. Her campaign is a tenacious throwback to the 1990's Clinton era that both helped and hurt at critical times. The strength of the Clinton brand gave her magical uplift and a commanding lead in national polls, a vaunted fundraising machine, free media usually reserved for the latest celebrity du jour and a surrogate known and beloved throughout the sentient world. Hillary's advantages were and are matched by a newcomer who has won the last 11 head to head matchups in blowout fashion heading into the final showdowns in Texas, Ohio, Rhode Island and Vermont. How do you say goodbye to somebody who has been a catalyst on the American political scene since 1992? She has a couple of choices that will dictate her legacy, she can bow out with grace and honor or she can be Friday the 13th part whatever, killing everything in her path. In three days, we have seen the public polarity opportunity for both scenarios. Hillary's end of the televised debate comments on Thursday were classy and heartfelt, even if oft repeated political sentiments and yesterday, when a screaming banshee said shame on you Barack for engaging in a fair criticism of mandates on universal health care had us all witness a rummaged black velvet painting unbecoming a person of her stature. Nobody wants her to go out looking like a ranting diminished shock jock, except those that believe that galling image should be uppermost in voters minds as her performance closes and gets shunted to off-off Broadway.

Waving two Obama mailings at a press conference, Clinton raised her voice and accused the Illinois senator of distorting her positions on healthcare and foreign trade.

"Enough with the speeches and the big rallies, and then using tactics right out of Karl Rove's playbook," she said, alluding to President Bush's former chief political advisor. "This is wrong, and every Democrat should be outraged." Reasons, rationales and remorse for Hillary's falling fortunes are not singular, but definitely situational. Each time her campaign faced a situation, they made old school choices reflecting badly on their candidate. There will be so many books published about this campaign in its roiling aftermath that I would advise starting a separate savings account for them now. Hillary herself, has the ability to score another record setting book deal adding to her memoir, Living History. Her insights and lessons learned would be another valuable contribution in building a body of knowledge about politics in the modern era as seen through the eyes of an immensely talented woman who fell short in a presidential bid that energized Americans, young and old, rich and poor, black, brown and white, like no other in History. 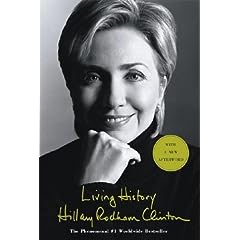 From the patriotic Lady herself, Hillary Rodham Clinton.